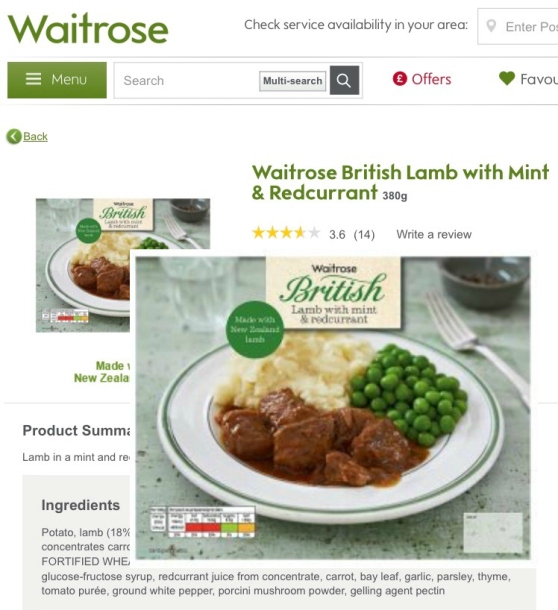 Celebrity chefs, farmers markets and media publications continually tell us that we should buy British food. In contrast to the 1990s yuppie ideal of airfreighted Icelandic strawberries in January, local food is the new sexy. Locavores salivate at the mention of village-grown carrots so spindly that they look like an advanced case of rickets and eggs at £6 per half dozen with speckled blue shells that perfectly match their Farrow & Ball kitchen wallpaper.
Yet local food has apparently become such a marketing campaign staple, it’s reached the point where “British” is no longer a description of origin or culture, but simply a brand name. In a string of tweets between Waitrose and a number of not-unreasonably incensed farmers, agricultural industry professionals and consumers, it emerges that selling New Zealand lamb under the label “British lamb with mint and redcurrant” is entirely acceptable, as “British” is simply used to denote the origin of the dish.
To be fair, nobody expects shepherds pie to be made from real shepherds, or toad-in-the-hole to contain tasty morsels of marinated natterjack. However, in an era when we care about how, where and when food is produced; and especially given the recent Tesco “fake farms” debacle, it’s difficult to believe that any marketing department could, with a straight face, announce that “British” is simply a brand name. What’s next? Cans of Special Brew sold under the new “champagne” brand?
A certain level of mistrust already exists between the consumer, retailer and farmer, with many consumers believing that the food industry lacks transparency. Traceability and clear labelling are increasingly important to the food-savvy consumer, yet these types of marketing initiative appear to be yet more attempts to manipulate consumer buying behaviour.

Absolutely no offence is intended to New Zealand sheep farmers who do produce fabulous meat, but when lamb from overseas is prominently labelled “British” (despite the seldom-read small print), consumers may feel misled and lose trust in buying British food. By all means celebrate the rich traditions of British cuisine, but please Waitrose, stop dressing mutton as lamb.

Sheep’s head broth, brains in parsley sauce optional. Nostalgic foodies in happy-heirloom-beet-utopia claim that we shouldn’t eat anything that our Great-Great Grandmother wouldn’t recognise as food – yet it works both ways. Follow the soup with a fish custard and a jam pudding and you have the perfect 1950’s meal – in line with the dietary recommendations of the day – 1/6 of your diet as fat, 1/6 protein and 2/3 carbs. Yummy!

During the last census in England, there was a social media campaign to persuade people who did not identify with a particular religion, to state “Jedi Knight” in the “religious persuasion” section of the forms. If enough people cited it, it would be officially considered as a religion.

The campaign failed, yet the picture at the top left made me think – just how many people would consider food or “foodieism” to be their religion nowadays? If we consider the concept of “faith” (definition: “complete trust or confidence in someone or something; strong belief in the doctrines of a religion, based on spiritual apprehension rather than proof”), the church sign above appears to explain the behaviors of those who are opposed to specific food production systems or management practices. We can have conversations with the nay-sayers face-to-face, on social media, or even through NY Times competitions, yet if foodieism is a religion, are we wasting our time trying to change their minds with facts?

Fortunately, recent survey data suggests that 94% of consumers buy food on the basis of price, taste and nutrition; 4.4% buy according to lifestyle choices (e.g. organic, vegetarian, local) and only 1.7% are a “fringe” group who wish to prohibit management practices or technologies that have helped us make continuous improvements in food production over the years. Nonetheless, consumers within this small group are extremely vocal, skilled at influencing media and legislation and are devoted to advancing their cause.

Just ask any politician – we can make huge headway influencing the masses in the middle rather than spending time trying to convince a small group to believe in a cause that they are already opposed to. The question is, how do we do so, and how much should we spend time counteracting negative publicity rather than being proactive about food production? If we take the recent lean finely textured beef (LFTB aka. “pink slime”) furor as an example, how many consumers were made aware of the issue not because of negative publicity generated by the media, but because of the huge amount of pushback from our industry via social media? At what point does it make more sense to stay quiet and concentrate our efforts on other issues where we have a chance to move public opinion, rather than fighting losing battles?

My Tweets
Join 13,377 other followers