One of the main criteria for publishing scientific research is that it should be novel, yet not a week goes by without yet another paper concluding that we have to reduce meat consumption in order to mitigate climate change. That’s the headline in media coverage relating to the latest paper from a researcher at the The Woods Hole Research Center (published in Environmental Letters), which examines nitrous oxide emissions (a highly potent greenhouse gas (GHG)) in 2050 under various scenarios.

It’s an interesting paper, not least for some of the assumptions buried within the model. Based on data from the FAO, the authors assume that meat consumption will increase by 14% in the developed world and 32% in the developing world by 2050. Coupled with the predicted population global increase (from the current 7 billion to 8.9 billion in 2050), it’s not surprising that a 50% reduction in meat consumption would be predicted to have a significant effect on total GHG. It’s rather akin to suggesting that each person will own two automobiles in 2050, so we should reduce car manufacture.

However, the more striking result is buried in Figure 1, showing that if efficiency of manure management and fertilizer application were improved, this would have a more significant effect on GHG emissions than reducing meat consumption. Given the considerable improvements in cropping practices, crop genetics and yields over the past 50 years there is absolutely no reason why this should not be achieved in the next 40 years.

Alas, a headline suggesting that agriculture needs to continue to improve manure and fertilizer efficiency just isn’t as sexy as the “eat less meat, save the planet” message so often propounded by the mass media. They say that bad news sells – it’s a shame that the lay press are so enamored with messages that denigrate ruminant production, rather than taking a broader look at the options available for mitigating future climate change.

*Thanks to Jesse R. Bussard for bringing this one to the forefront of my “to do “ list.

Can we feed up to 10 billion people in 2100 by improving crop yields, reducing deforestation, and reducing meat and dairy consumption? These solutions are among those suggested by Jonathan Foley at the University of Minnesota’s Institute of the Environment to enable the increase in food production required by the future global population. These are logical suggestions, yet the proposal that meat and dairy consumption should be reduced is likely to be the most-debated, particularly as livestock industry stakeholders may regard this as yet another attack on animal agriculture.

The futility of the “Meatless Mondays” campaign has been discussed ad infinitum, yet in contrast to the EWG’s recent report, Foley does not attempt to promote a vegetarian or vegan ideology or to suggest that climate change could be reversed if only we all ate humanely-certified or organic meat. Instead, the report concludes that resources could be saved if we shifted to meat consumption towards pork and poultry production as:

Based on those data, Foley’s conclusion is entirely logical. However, as Carl Sagan said, “Extraordinary claims require extraordinary evidence” – and here the evidence is lacking. A recent review of feed efficiency by Wilkinson reports that monogastric animals require 4.0 kg (swine) or 2.3 kg (poultry) of feed per kg of gain. Monogastrics are indeed considerably more efficient than their ruminant counterparts as beef animals require 8.8 kg feed per kg gain – considerably more than swine or poultry, but far less than Foley’s estimate.

It would be convenient to argue that the errors in Foley’s feed efficiency data (not to mention religious limitations on pork consumption) negate the report’s conclusions. But isn’t it logical to argue that we should eat meat produced in systems that use fewer resources to produce animal protein? Personally, I spend more than half my time traveling to present precisely that message to the animal industry and to encourage livestock producers to improve efficiency. I absolutely believe that we need to improve productivity and efficiency in order to feed the growing population. However, traditional feed efficiency data have a major flaw – it’s assumed that all animal feed could otherwise be used to feed humans.

Wilkinson suggests that the traditional concept of feed efficiency be re-examined to reflect the quantity of human-edible crop inputs that are used to produce a unit of energy or protein from animal products. For example, humans cannot digest pasture, only 20% of the nutritional value of oilseed meals can be utilized for human food and yet 80% of nutrients within cereals, pulses and soybean meal are human-edible. By partitioning out the human-edible component of animal feed, Wilkinson demonstrates that the human-edible energy feed efficiency ratios for pork and cereal beef are similar (Figure 1*) and that dairy production actually produces twice the amount of human-edible energy than it uses (input:output ratio of 0.5). On a protein basis, cereal beef has a higher human-edible protein feed efficiency ratio (3.0) than pork (2.6), but suckler beef systems where cattle are grazed on pasture again produce more human-edible protein than they consume (input:output ratio of 0.9, Figure 2*). Not only are these revised feed efficiency estimates considerably lower than those quoted by Foley, but they underline the importance of herbivorous grazing animals in utilizing human-inedible forage to produce animal protein. 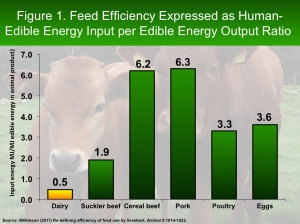 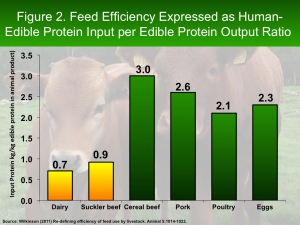 Numbers have power – it’s always tempting to base a suggestion around a single data point that “proves” the argument. Feed efficiency is a useful metric, but as we face an ever-increasing challenge in balancing food demand, resource availability and consumer expectations, it’s critical that we examine the bigger picture. The ruminant animal has a major evolutionary advantage in its ability to digest forages – we may be better acquainted with the human dietary advantages of probiotic bacteria than our ancestors, but until we are equipped with human rumens (humens?) we cannot hope to effectively make use of all crop resources.

*The importance of acknowledging the human-edible component of feed efficiency was part of my presentation at the Alltech Ruminant Solutions Seminar in Ireland this week – to go to a PDF copy of my presentation please click here.