My Twitter feed has lit up like a firework this week with the news that cows are being murdered to produce the new plastic British £5 notes. Or, to correct the sensationalism with science, the notes contain a trace of tallow in the polymer that’s used to make them. Tallow is a by-product of beef production – it’s effectively the fat on the animal that we don’t want to eat, and has been used for centuries in a myriad of products.

Let’s be very clear here. No cows are being slaughtered (murdered!) to make £5 notes. Cattle are either slaughtered for meat or euthanised due to illness – there are no Bank of England-sanctioned posses stringing up helpless cattle as a license to print money (literally). Fortunately, we are able to use the portion of the animal’s carcass that we can’t (or won’t) eat to manufacture products that would otherwise rely on synthetic chemicals.

Not surprisingly, the majority of the outcry has come from vegetarians and vegans. While I will defend the right of anybody to choose what they eat or wear (note that I am not criticising or denouncing anybody’s religious beliefs here), the current protests seem to be slanted towards choosing to be offended by a minor point, rather than any semblance of logic.

According to a rather nifty (yet accurate) calculation by the guys at Vice, it would take 23 kg of tallow to make all the new £5 notes that will be in circulation by the time the old ones are phased out. The total tallow yield per animal is ~40 kg, so it would take just over half of one animal (23/40 = 0.58) to produce all the tallow for the UK’s total £5 note requirements. 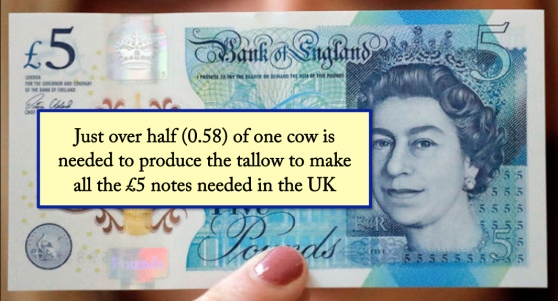 Many of those who are protesting are vegetarian (as opposed to vegan), thus still consume milk, eggs, honey and other non-meat animal products. Given that 20% or more of the cattle slaughtered in the UK are adult cows and bulls (i.e. they have reached the end of their productive life in the dairy or beef herd rather than being specifically reared for meat), it makes sense to utilise whatever components of their carcasses are suitable for industrial purposes rather than diverting them into landfill or incinerators. If dairy consumption is acceptable to vegetarians, can it really be claimed that bank notes containing a fraction of the spent dairy cow’s carcass as tallow are not? 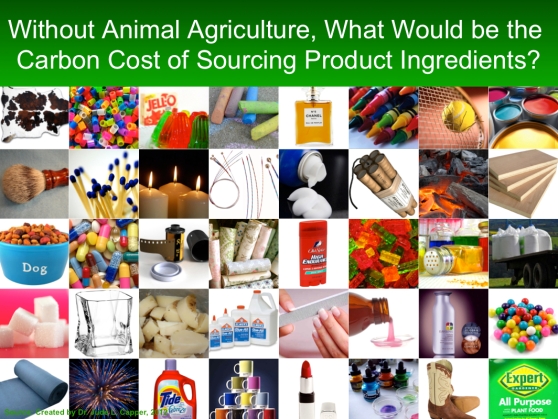 As I have mentioned in previous blog posts, myriad everyday products contain by-products from cattle. Given the current outcry, once can only assume that those who shun the new £5 notes also refuse to travel in cars, buses or on bicycles (as (t(as tyres contain stearic acid, again from tallow); do not drink from bone china mugs; or disavow beer filtered through isinglass. Or, as with so many other issues, is it an opportunity for a small minority to protest and promote their personal dietary choices behind the guise of population-wide offence?

The online petition against the new £5 notes currently has >129,000 signatures. Obviously we all have the right to protest against issues that alarm, anger or offend us, and social media gives those opinions far greater weight than we had in the past. Yet is this really an issue that is more important (as judged by media coverage) than 11-year-old girls being forced into marriage? Or livestock being slaughtered without first being stunned? Or asylum seekers being refused entry? Perhaps in this case, the moral minority need to examine the bigger picture, and consider the issues that really matter.