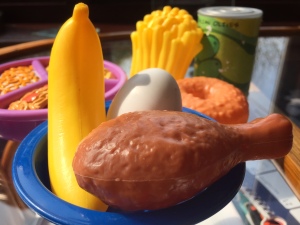 Am I missing something, or have words ceased to have any meaning? Take the phrase “nut cheese”. Seriously. Now stop giggling like a 12-year old and actually think about it. Would you buy some nut cheese for your grilled cheese sandwich? Fancy some nut cheese on your pizza? Actually, purely from a practical point of view, no, you wouldn’t. Nut cheeses don’t really melt, they are better for spreading on crackers. But, leaving the double entendres  aside, why would we give Edam (sorry…) about nut cheese? Apparently it’s a product that’s made exactly like cheese, if you ignore the fact that (dairy)* milk doesn’t have to be ground with water to separate the solids before the cheesemaking begins. Oh, and the fact that nut cheese made from nuts. Which means that despite the name, it’s not actually cheese.

Why does the concept of nut “cheese” irritate me so? It’s not paranoia that everybody will become so enamoured by nut cheese that the dairy industry will cease to exist (could a non-melting, spreading cheese really compete with a hefty chunk of Wensleydale?); or the suspicion that it’s a dastardly plot to infiltrate nut cheese into our children’s diets and tempt them away from the wonderful world of extra strong Cheddar and ashed-rind goats cheese. It’s simply because it’s yet another fake food. Believe me, I get equally irritated by soy “milk”; orange-colored soft drinks masquerading as “juice” (ahem, Sunny-D); and burgers made of mashed tofu. Why? Because I don’t see the point of plastic fantastic meals. Yes, I’ve eaten vegan cheese, vegetarian sausages and tofu roasts. I ate them when I was vegan** and I felt hypocritical for doing so even then. No, they didn’t taste better than the “real” thing (although one soy ice-cream was amazingly good). No, I couldn’t believe I was tucking into a juicy hot dog when I was simply chewing on something with all the taste and texture of reconstituted shoe leather. No, they didn’t compensate for my brothers gleefully eating bacon sandwiches. They simply seemed like a poor imitation of the diet that I had previously enjoyed as an omnivore.
When I was vegan I loved vegetables, and I still do now as a happy omnivore. I may lose my beef-loving credentials for admitting this, but after presenting a webinar on beef sustainability yesterday, I prepared and ate an entirely vegan meal. Admittedly I didn’t notice that it was vegan until I was chatting with @MomattheMeatCounter afterwards, but more tellingly, I didn’t miss the meat. I love vegetables because they are fabulously diverse. They have a myriad of flavours and textures that no other foods can provide. I could happily eat that same vegan meal two or three times per week. Yet vegetables aren’t meat or dairy, they don’t provide the same flavours and nutrients, and I couldn’t go back to being vegan. Aside from anything else, I’d miss real bacon cheeseburgers.
Which brings me to my major issue with all faux meats and dairy products. If you’re determined to give up animal proteins for ethical reasons, then why eat an ersatz version? Why not celebrate the fabulousness of fruit and vegetables and cook creative plant-based meals rather than eating a make-believe version of an animal-based food? Why are these faux foods often championed by people who otherwise derive their careers from bleating about “natural” foods and telling us that if a third-grader can’t pronounce it, we shouldn’t eat it? Why are millions being invested  in the promise of growing meat in labs or turning pea protein into faux eggs when we could simply eat peas instead?

Believe me, if I ever have the misfortune to become intolerant to gluten or dairy, I will be seeking real (and naturally gluten and dairy-free!) eggs at Easter rather than a faux chocolate egg with all the supposedly sinful ingredients removed***. Yet this treat was next to the regular chocolate eggs in the supermarket this weekend. A great thing for the small proportion of people who actually have dairy or gluten allergies, but also a clever Easter guilt-inducer to parents everywhere who are convinced that little Crispin and Arabella’s blood chemical levels will otherwise reach “toxic” limits akin to being given an intravenous infusion of the self-proclaimed Food Babe’s nemesis, Starbucks’ Pumpkin Spice Latte. 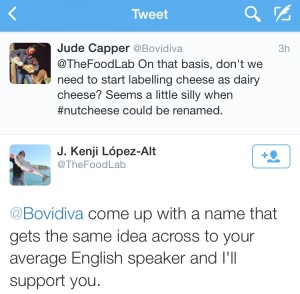 Maybe I’m pedantic, overly irritable about the appropriation of words that are specific to certain foods. Perhaps my European roots run too deeply – after all, I come from a country that designates Stilton cheese as only being produced from milk from cows grazed in three specific counties. Yet it seems like a lazy excuse to suggest that if nut cheese isn’t called cheese it will languish uneaten in the supermarket for months because nobody will understand what it is. In a world where new words are invented every single day (please don’t get my Mother started on the validity of the word “webinar”) is it really conceivable to suggest that marketers can’t find an alternative to “cheese” or “milk” to describe plant-based foods? After all, nobody tries to call tofu “meat”…..yet. Perhaps that will be the next label on the faux food buffet table? I’m sorry, but I Camembert it.
*Even typing (dairy) as a modifier before milk raises my blood pressure a few points.
**I was a strict vegan for 12 months when I was 15. When I was 16 I resumed eating bacon as if pigs were going out of fashion. I still enjoy vegetarian or vegan meals, but I’ve never looked back.
***Yes, I have eaten milk-free milk chocolate – it could easily be used as a substitute for candle wax.