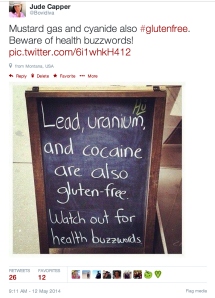 I’ve just been involved in that most pointless of activities – a Twitter argument. Entirely without value as neither side will admit defeat (or even concede ground) and it’s difficult to make rational, lucid points using words like “hereafter” and “whither” when the 140 character limit turns scientific discussion into a sea of “u r misinformed re: assoc w/glutfree diet” gobbledegook.

This debate was caused by me posting the photo to the left relating to the use of  “gluten-free” as a marketing term associated with supposedly healthier food. However, in the tweet below, the arguer (arguee?) demonstrated the commonly confused correlation vs. causation which appears to be the poster child for populist bandwagon-jumping science.

Their follow-up tweet cited this website, which claims that 55 diseases can be caused by eating gluten, and there’s a link to a peer-reviewed New England Journal of Medicine paper to prove it. Excellent use of scientific literature to support the adoption of a gluten-free diet. 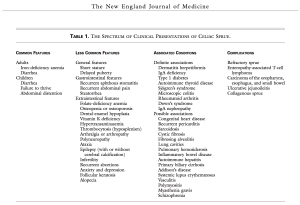 Just one tiny problem… the 55 diseases* listed in the table to the left are indeed associated with cœliac** disease in that people who are cœliac (0.3-0.8% of the population) often also suffer from a range of other conditions. However, this does not mean that anybody suffering from short stature, diarrhea, rheumatoid arthritis or congenital heart disease will have their symptoms relieved by adopting a gluten-free diet. Heck, if it did, we’d all be 6 feet tall and heart-healthy, right?

To put it another way, all penguins are black and white. Does that mean that all black and white objects are penguins? I have utmost sympathy for sufferers of cœliac disease as it must be a very difficult and painful condition. However, when a gluten-free diet is not only promoted being more healthy for the general population, but backed by willful misinterpretation of peer-reviewed data, it’s just another indication that we need better scientific education. Correlation not causation – rinse and repeat.

*Note that these are not all diseases per se, but that was how they were defined by the website
** An autoimmune disease in which the small intestine is hypersensitive to gluten, leading to difficulty in digesting food. As a Brit, I’m using the English spelling as I find it too grammatically painful to omit the ligature (œ)

My Tweets
Join 13,375 other followers