This week, another paper has been released claiming that we should change to a vegetarian diet in order to “…cut global food emissions by two thirds and save millions of lives“. As ever, media coverage of the paper by Springmann et al. ignored salient points regarding the importance of increasing fruit and vegetable consumption and reducing energy intake in reducing deaths from heart disease, cancer and diabetes; and simply focused on the claim that reducing meat intake would improve health and cut greenhouse gas emissions (GHGs). The simple message to the consumer? Go vegetarian.

So are GHGs the only important environmental metric? Absolutely not. What about land use? Air quality? Fossil fuel consumption? Water use? Biodiversity? The myopic focus on GHGs as the only arbiter of environmental sustainability completely ignores these factors, yet the results of the current study (and similar papers) are promoted worldwide as a panacea to solve all environmental issues.

Can you imagine a world where we only look at one consequence of our actions? Where our only consideration when buying a car is the colour of its paint? Or the criteria for accepting a new job is whether they have good coffee in the canteen? Surely a ridiculous idea – all of our actions have direct and indirect consequences, some predictable, some entirely unforeseen, and we weigh up these outcomes with every decision that we make – including dietary choice. If we examine a number of the assumptions and recommendations within the current paper, it’s apparent that the negative consequences of the one-dimensional GHG focus may outweigh any benefits gained. 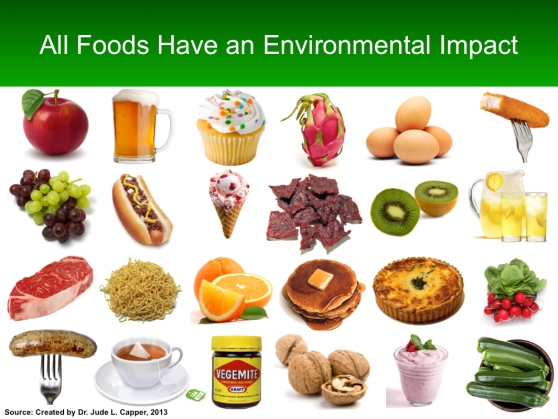 Replacing milk, meat and eggs with plant-based foods (legumes, nuts, etc) is entirely possible, yet it does not occur at zero environmental cost. Every single food that we consume has an environmental impact, and although the greenhouse gas emissions associated with a unit of lettuce or beans may be less than pork or beef (asparagus is a notable exception), the land required to produce equivalent energy or protein from plants is significant.

We cannot simply remove cattle from the low-quality range and pastureland that they occupy in the majority of grazing regions and assume that we can plant brussels sprouts or soybeans instead. Only a small percentage of pastureland is productive enough to produce human food or fibre crops (8.0% in the USA and 10.8% in the UK). The fact that pastureland would have to be converted to cropland, releasing sequestered carbon dioxide to the atmosphere and increasing the use of fertilisers and irrigation water, was not accounted for in Springmann et al.’s study. Indeed, from where would we source fertilisers for crop production if we significantly cut meat consumption and thus livestock populations? Is an increased reliance on dwindling reserves of inorganic N, P and K really a sustainable solution?

Finally, and most importantly, cattle do not simply exist as a source of milk or meat. In many developing countries, immense cultural significance is placed upon livestock ownership and ruminant animals play a vital role in supplying draught power, capital assets and agricultural enterprise diversification. Should a single mitigating factor for reducing GHG emissions overcome the moral obligation to support and assist subsistence farmers in developing regions? It’s vital that we take a holistic view that encompasses environmental responsibility, economic viability and social acceptability in order to improve food system sustainability rather than simply focusing on one aspect of the problem. Rather than taking a whole-system approach to environmental and human health, the study by Springmann et al. is akin to amputating both legs in order to try and cure arthritis. Short-term pain may be reduced, but long-term suffering is inevitable.