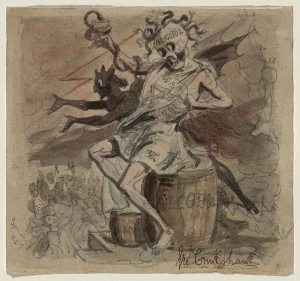 Post-prohibition, is meat the new devil?

My Grandpa, a strict Methodist, took the pledge to abstain from alcohol back in the 1940’s when the church was endorsing Prohibition via the Temperance movement in the UK. It was an entirely personal choice for him, one that he felt was right for his lifestyle and a cause that he didn’t try to recruit other people to join. Admittedly it filtered down to his children and even had some influence on his grandchildren, although for my brothers, cousins and me the effect is now somewhat akin to adding a single ice-cube to a tumbler of whiskey.

The gin-palace is heaven to them compared to the hell of their pestilent homes… The drink dulls every sense of shame, takes the sharp edge from sorrow, and leaves the drinker for awhile in a fools’ paradise… It is not only crime and vice and disorder flourish luxuriantly in these colonies, through the dirt and discomfort bred of intemperance of the inhabitants, but the effect upon the children is terrible. The offspring of drunken fathers and mothers inherit not only a tendency to vice, but they come into the world physically and mentally unfit to conquer in life’s battle. The wretched, stunted, misshapen child-object one comes upon in these localities is the most painful part of our explorers’ experience. The country asylums are crowded with pauper idiots and lunatics, who owe their wretched condition of the sin of the parents, and the rates are heavily burdened with the maintenance of the idiot offspring of drunkenness.

Given such strong words, it’s not surprising that alcohol was considered by many to be the root of all evil. In this modern world, where a myriad of organizations exist to help us with our addictions to the more insidiously hedonistic pleasures in life*, surely we are beyond taking the pledge?

Alas no, the Environmental Working Group is at it again, this time with a pledge that they aim to get 100,000 supporters to sign. That’s right, you can save the planet by simply clicking a button on the internet stating that:

So, let’s assume 100,000 people sign up for this. That will cut the USA’s carbon footprint by 0.00014% (it would only be 0.44% if the entire population took the pledge *and* actually stuck to it). Hardly a significant environmental effect.

What would you replace meat with? Jack-in-a-Box Jalapeno poppers? A couple of Twinkies? A 1/2 lb soy burger? It’s rational to assume that giving up meat for one day a week will not suddenly cause everybody to have more time to cook, or to prepare fresh exotic salads from scratch – the basic food preferences will stay the same, simply without meat.

So the chicken breast, hamburger or pork chop is replaced by a vegetarian burrito – one from Chipotle no less, which has made a big play of not using rbST and other hormones. According to USDA’s nutrient database, the calorie content of an 8 oz steak is 581 calories with 35 grams of fat.  An 8 oz pork chop has 524 calories with 38 grams of fat. The vegetarian burrito? Chipotle lists nutritional information by ingredient, luckily the handy dandy My Fitness Pal website has put together all those ingredients –  750 calories with 27 grams of fat. Hardly a short-cut to becoming a lean, mean fitness machine.

Life is all about choices, and all dietary choices have environmental and health consequences. The Temperance movement believed abstaining from alcohol made for a better life and (via Methodism) a promise of a better afterlife. Can the same really said of abstaining from meat for one day per week? Should meat be renamed Mephistopheles – or is abstention simply another short-term panacea by which we can feel better about our health, environment and karma via bad science and vegetarian spin?

8 thoughts on “Taking the pledge – Meat as the new Mephistopheles?”